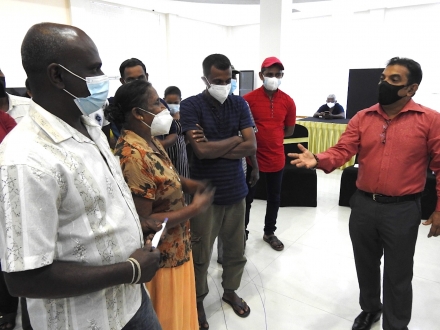 In the recent years, tension among religious groups has risen considerably. The lack of knowledge and misconceptions about other faiths have caused mistrust and fractured relations among religious groups. Identifying and addressing existing issues are important in preventing escalation into a deep rooted conflict. Local Inter Religious Committee (LIRC) members have a responsibility to address these issues to strengthen religious harmony. Under NPC’s Collective Engagement for Religious Freedom (CERF) project, Mannar and Rakwana LIRCs took initiatives to mitigate ethnic tension in their communities.

After the Easter Sunday attacks, there was a decline in violence. Mannar LIRC decided it was a good opportunity to initiate community level dialogue to mitigate potential religious conflicts. Two separate discussions were carried out for village leaders organized by NPC and Centre for Communication Training (CCT). Facilitators stressed the importance of solving issues through a nonviolent approach to avoid the consequences of violence. They explained that the unity of the villages would ensure a win-win situation for both communities while encouraging them to collectively resolve their problems with empathy and compassion.

Gnasekaram Justin pointed out the importance of negotiations. “I think NPC created a platform for us to discuss these matters and they have shown us the way to peacefully solve them.” Ilaiyathambi Siddeeq stated that mutual understanding was necessary to resolve disagreements.

At the end of the discussions, possible solutions were suggested to strengthen unity between the villages. It was proposed to conduct awareness sessions to change the attitudes of the youth and key decisions makers because positive attitudes were important to solve disputes peacefully. The importance of negotiations and mutual understanding were recognised by both communities.

Rakwana LIRC facilitated discussions between the two communities to share opinions and find a solution in a non-violent manner, which were productive and created an opportunity to talk about the importance of unity to restore peace in the village. Both groups shared how they had lived peacefully in the past. “We had the chance to discuss the problem. We are living in one village so we need to resolve this peacefully,” said Buddhika Thanampita.