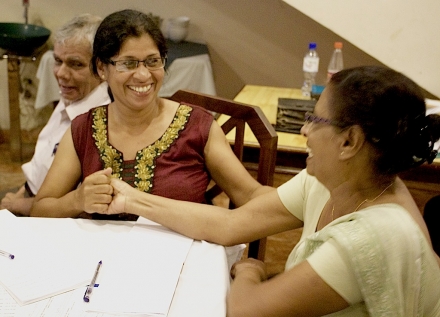 An introductory meeting was held in Polonnaruwa for the establishment of a new District Inter Religious Committee (DIRC) under the Initiating Multi-level Partnership Action for Conflict Transformation (IMPACT) project supported by Misereor.

Six other DIRCs have already been set up in Anuradhapura, Badulla, Hambantota, Kalutara, Ratnapura and Kurunegala. NPC has set up nine other DIRCS over the past four years.

During the three year IMPACT project,working with the new DIRCS, NPC will create awareness within communities throughout the country of the requirements to progress from post-war to post-conflict development by explaining the principles of Transitional Justice (TJ).

NPC Executive Director Dr.JehanPerera explained the mandate of NPC and the reasons for establishing DIRCs. He described the elements of TJ and NPC’s role in supporting the process. After Assistant Programme Coordinator Rasika Seneviratne explained the project, views and suggestions were gathered from the participants about proposed TJ and reconciliation mechanisms.

The response from participants was very positive. A post meeting questionnaire showed that the majority of them agreed that truth, accountability, reparations and institutional reforms were necessary.

At the end of the meeting, the Polonnaruwa DIRC was established.

Also under the IMPACT project, a one day workshop on pluralism, good governance, democracy, the Lessons Learnt and Reconciliation Commission and TJ was conducted for Kurunegala DIRC members.

The first monthly meeting of the Anuradhapura DIRC was also held where Project Consultant Henry de Mel discussed identification and prioritisation of issues related to the project, how to do monitoring and other relevant issues.