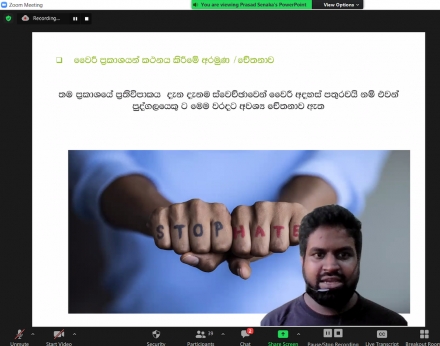 During the first session, participants were given an introduction on hate speech, which is defined as a speech or expression that denigrates a person or persons on the basis of (alleged) membership in a social group identified by attributes such as race, ethnicity, gender, sexual orientation, religion, age or physical or mental disability.

In the second session, participants learnt the factors that contributed to the spread of hate speech and its social impact depending on where the speech was said, the image of the speaker and the objective with which it was said. It could lead to division among communities and damage to property and people. Hate speech led to degrading people, physical assault, property destruction, attacks on places of religious worship and disruption of livelihoods and business activities. Modes in which hate speech
was spread were meetings, media, group discussions, posters, gossip and social media.

The third session was on social media. Participants were taught about the rapid increase of internet users, algorithms and google cookies. The speakers used examples to show instances where expressions of hate speech on social media had led to violence. In Myanmar, military leaders used social media to  demonise  the Rohingya Muslim minority ahead of and during a campaign of ethnic cleansing. A UN fact finding mission said, “Facebook has been a useful instrument for those seeking to spread hate, in a context where, for most users, Facebook is the Internet”.

Sri Lanka has similarly seen vigilantism inspired by rumours spread online targeting the Tamil Muslim minority. During a spate of violence in March 2018, the government blocked access to Facebook and WhatsApp for a week, saying that Facebook had not been sufficiently responsive during the emergency.

Participants were made aware of the international and domestic legal framework of hate speech in the final session. The master trainers spoke about Articles 19 and 20 of the International Covenant on Civil and Political Rights (ICCPR), Article 4 of the International Convention on the Elimination of All Forms of Racial Discrimination (CERD), Rabat Plan of Action, Article 19 of the Universal Declaration of Human Rights, Sri Lankan Penal Code, Sri Lankan Police Ordinance, Profane Publications Act No. 41 of 1958 and Prevention of Terrorism Act (Temporary Provisions Act) No.48 of 1979.

“Teachers experienced hate speech during the teachers’ strike. On social media and on many TV stations teachers were humiliated. At the end it is the children who suffered. There is conflict created between officials, teachers and parents. I as teacher will teach my students about the things we learnt. There are many people here who work in different institutions and they can influence their co-workers,” said Shiromi Pandipperuma, a teacher from Kalutara.

“We have received messages saying we should not eat from Muslim shops. We now understand that we should always fact check and not forward these messages to anyone,” said a government officer from Kalutara.

“It is a good initiative of NPC to take this message to youth, government officers and religious leaders. It is during elections that hate speech increases. As a principal, I suggest that this topic should be taught to school children. NPC should conduct lectures in school,” said Saman Ekanayake from Anuradhapura.