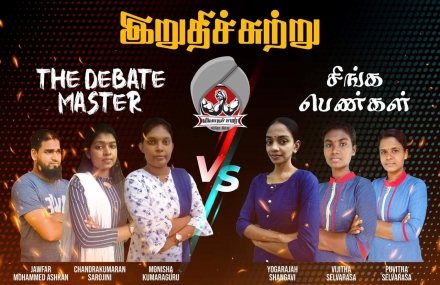 Young people are often seen as passive beneficiaries rather than active leaders. Around the world, countless young people are eager to shape their communities but governance structures, poverty and a lack of education and employment can muffle their voices. To strengthen youth leadership in building pluralistic values in the post war context, NPC has provided youth with a platform to demonstrate leadership skills and create a positive impact within in their communities under its project, Creative Youth Engagement for Pluralism (C-YEP).

Several debate competitions were organized by undergraduates from the Eastern University, University of Ruhuna and Sabaragamuwa University with the guidance of academics. Students from the Eastern University held an interfaculty debate competition with the participation of over 100 people. The topic on final day was individual rights of Sri Lankans can be controlled for the development of the country. The debate was held on Zoom and telecast on live on Facebook.

The University of Ruhuna organized an inter department debate competition via Zoom on voice of youth for pluralism.

Students from the Sabaragamuwa University also held a debate competition with the participation of Muslim, Tamil and Sinhala students. The topic for final day was the major factors influencing the crisis of pluralism in the modern world are the state policies that affect each country.

Before the competition, a series of training sessions on pluralism and debating were conducted and judges selected the best teams. Young people, Civil Society Organizations, community leaders, academics and the public were in the audience. Debating activities led by young people set a benchmark for conducting online activities during pandemic so that people enjoyed the discussions and gained knowledge.