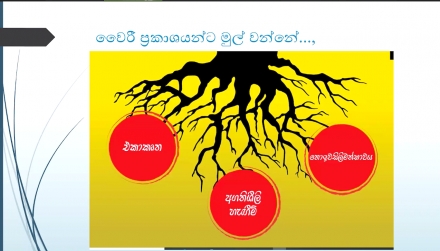 NPC’s Technical Assistance to Justice Institutions in Sri Lanka project is conducting a series of campaigns on Countering Hate Speech.

The campaigns will be conducted in three phases:

As part of the campaign in Monaragala, a dialogue against hate speech and violence was conducted online with the participation of 50 religious leaders, youth, government officers and differently abled persons.

“In several parts of the Bible, the importance of words is emphasised. The Bible mentions positive writings such as expression of remembrance and good deeds. But the Bible warns us that the use of negative words will lead to destruction. We are asked to think twice before speaking,” said Rev. Luke Edirisinghe.

“The main reason conflicts arise is because of hate speech. No religion teaches hatred. When people are obstructed from practicing their religion, it leads to hate speech and people tend to hurt the feelings of others. To take this message forward into society, religious leaders should teach this in their sermons,” said Maulavi Mansoor Amanullah.

He stated that there were two aspects of hate speech - trying to eliminate external ethnicities and getting together internally. For example, after the Easter attack the media said that in two mosques there were swords found so there was a fear created in people that all mosques are similar. The swords were not brought for violence but for safety. Now there was no mention of this incident.

“The intention of religion is to unite people. It is important to know about hate speech so that we can learn to cross check information provided by media. The aim of NPC is the create unity and pluralism. We should view other ethnicities as our strengths and not weaknesses. We want to help the government. Only if there is unity can the country progress,” Dr. Perera said.

Mr. Tikirikumara Jayawardene, Development Officer of the Disability Unit of the Election Commission, explained the types of human diversity: cultural, ethnic, religion, age, sexuality, gender and disability. He emphasized that diversity was the identity of a country and that it must be respected.

He said that hate speech was not confined to religion or ethnicity, and people should not be demeaned and labelled with names that were physically and mentally hurtful, which would eventually propel people towards terrorism and extremism.