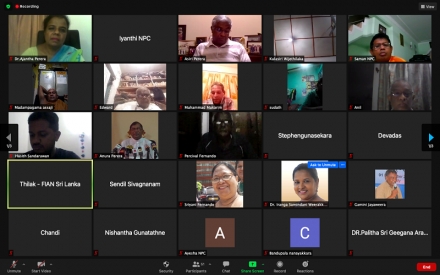 Colombo District Inter Religious Committee (DIRC) is holding a series of online meetings to educate the public and create awareness on issues facing the country under NPC’s project Plural Action for Conflict Transformation (PACT). Various experts are delivering lectures and facilitating discussions and debates that encourage community engagement meetings. Three meetings have been held so far with about 60 participants for each.

At the first meeting Dr. Ajantha Perera, a leading environmental activist, spoke about the X-Press Pearl ship calamity and its environmental impacts. She delivered a comprehensive analysis on how the accident escalated into an environmental disaster due to poor, delayed decisions taken by the authorities. She pointed out that the Colombo harbour did not have the proper equipment and knowledge to deal with the chemical spill from the ship that was carrying dangerous cargo. She said proper mechanisms must be in place to deal with any future incidents.

Mr. Thilak Kariyawasam spoke on the important role of the civil society activists who could pressure the authorities to ensure that justice was done to affected people and to protect the country and its environment from future disasters.

At the second meeting Mr. Ravi Kumundesh, President of the College of Medical Laboratory Science and the Academy of Health Professionals, discussed COVID-19 and its social impact on Sri Lanka. He said the health sector was under developed and that people did not demand a quality health service, which was their right.

He pointed out that there was a large gap in information management in the health sector. Despite the government imposing travel restrictions to control the spread of the COVID-19 virus, the authorities did not have a proper tool to analyse whether Covid-19 infections and deaths have decreased as a result.

At the third meeting, veteran journalist and newspaper editor Victor Ivan spoke on the economic crisis facing the country. He said that short sighted decisions by leaders had led to a downward spiral especially because of discrimination against minority communities, which led to communal uprisings and a 30 year ethnic war.

He said the nation should ask for forgiveness from the minority communities that have suffered at the hands of the majority. This could be a starting point for Sri Lanka to overcome its economic, social and political crises and go forward. A dialogue should be created among the people to identify a solution.

He encouraged women to engage in civil activist movements and leadership roles because they were stronger and more versatile than men.

Also under PACT, the team has been discussing the distribution of relief items funded by Misereor and the German Embassy to COVID-19 victims with DIRC members and government officials. The items include PPE kits for frontline workers, sinks, disinfectant spray machines and dry ration packs for low income families and orphanages, elders’ homes and disabled care homes.

The PACT project orientation meetings were concluded with online meetings for Ratnapura, Kurunegala, Jaffna and Batticaloa districts. DIRC members discussed the implementation of COVID-19 relief programmes. Resource persons gave lectures on topics that DIRC members had chosen to enhance their knowledge on such as the Right to Information Act, the Constitution, governance, the ethical usage of mainstream media and social media and how to develop a pluralistic society.