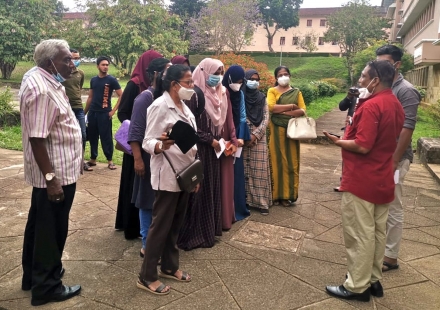 A campaign to spread awareness about hate speech among university students, lecturers and professors at Peradeniya University was conducted by NPC’s Technical Assistance to Justice Institutions in Sri Lanka project.

The first stage of the campaign was a press conference on society’s role in preventing hate speech. Books and leaflets on the prevention of hate speech were handed to students and lecturers in the seven faculties as well as a book on the subject that was presented to Vice Chancellor Professor Upul Dissanayake.

Two training programmes on prevention of hate speech were conducted by master trainers for youth leaders in Kalutara and Matara.

Also under the same project two training programmes on conflict management and analysis were conducted by master trainers for religious Leaders and youth leaders in Kebithigollawa and Matara, focussing on basic human needs and identity. Participants analysed conflicts in their communities using the four tools of the conflict tree, conflict mapping, the conflict layer model and timeline. They were made aware of their roles and responsibilities in building a pluralistic and peaceful society.

Other topics discussed included minority religious rights, facilitating dialogue between communities, gender rights and the political will to bring about sustainable peace.