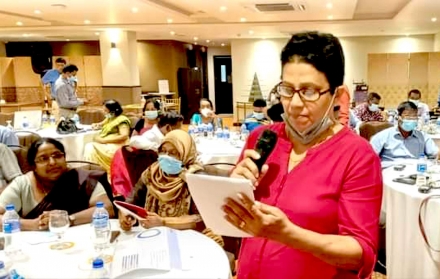 A progress review meeting to discuss the results of a capacity assessment of NPC’s 17 district partner organizations was held in Colombo under the Plural Action for Conflict Transformation (PACT) project, which is funded by Misereor and Cafod. Participants discussed their ideas for the way forward as civil society organizations amid new challenges.

In 2021 NPC has been carrying out capacity assessments of its district partner organizations that coordinate the District Inter Religious Committees (DIRCs). A checklist was created to assess the strengths and weaknesses of partner organizations and their relationships with DIRCs to identify the gaps and issues that exist and to help them overcome any deficiencies.

After capacity assessments were conducted in the 17 districts NPC, with the help of data analyst and researcher Shashik Silva from the Social Scientists Association, analysed the data to determine where each partner organization was placed in terms of their relationships with DIRCs, the NGO Secretariat, government organizations and NPC and other relevant aspects. This helped to determine areas that they had to improve in order to strengthen and sustain the DIRCs in a more effective manner.

At the meeting NPC’s Executive Director, Dr. Jehan Perera, spoke on the increasing challenges to civil society organization in a pandemic-driven society. He spoke about the need to keep the people unified across deepening ethnic and religious divides and the need to work with government officials to build peace and harmony. Fostering a pluralist ethos, he said, was the best antidote to majoritarian thinking which was a worldwide phenomenon that had taken a strong grip in Sri Lankan political thinking.

Partner organizations were given the opportunity to create a SWOT analysis identifying their strengths, weaknesses, opportunities and threats of their organizations and the communities they
worked in.

They discussed the current situation in their local communities and the issues DIRCs needed to know about to carry out their work in transforming conflict and building peace.

Vavuniya DIRC decided to organize a workshop on early warning and early responses and an awareness session on civil law and the constitution. Anuradhapura DIRC will have an awareness
workshops on how to use social media in a positive way and to improve their knowledge on conflict analysis and conflict resolution.

NPC provided laptops to the DIRCs to help in administrative and financial work. & There are various problems in the interior villages of Anuradhapura. There are children who are getting married at an early age due to ignorance. There are child mothers and several children involved in prostitution. Please conduct programmes to educate parents and children,&quot; said a member of the Kahatagasdigiliya Pradeshiya Sabha. & had no idea about conflict transformation. Now I realise that there are both positive and negative consequences of conflict,&quot; said a student from Rajarata University.