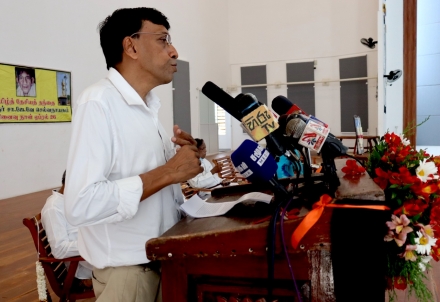 NPC’s Executive Director Dr. Jehan Perera delivered the annual memorial lecture organized by the Thanthai Chelva Memorial Trust in Jaffna on the topic of “Moderating Peace - Unifying the Paths to Reconciliation.” The lecture commemorates the late leader of the Ilankai Thamil Arasu Kachchi (IITAK) S.J.V. Chelvanayakam who was the dominant Tamil leader of his era. Among his notable contributions was negotiating the Bandaranaike-Chelvanayakam Pact of 1957 with Prime Minister S.W.R.D. Bandaranaike.

Recent speakers at the lecture have included former President Chandrika Bandaranaike Kumaratunga and parliamentarians M.A. Sumanthiran and Dr. Rajitha Senaratne. The Chairman of the Trust, Bishop S. Jebanesan, said that committee members had decided to invite a civil society representative this year who had demonstrated long term commitment to inter ethnic justice and peace.

At the commencement of his presentation Dr. Perera thanked the organizers having recognized the role that civil society played in the reconciliation process. He added, “We are supported by Sri Lankans at the community level and by the international community. This is in keeping with the wisdom contained in the Hindu scriptures that the whole world is one family to the wise. Our goal in reconciliation is to unite the people of our country to be a family.”

Excerpts from the speech:
“…A policy of reparation can be implemented by reviving the working of two Transitional Justice mechanisms that were established by the previous government. These are the Office on Missing Persons (OMP) and the Office for Reparations (OR). The OMP has been issuing certificates of absence to those whose family members went missing and continue to be missing. These Certificates of Absence entitle families of the missing to claim a monthly payment of Rs 6,000 that can be increased and systematised by the OR. To the extent that the government or any entity provides more compensation or engages in more reform, the less will be the pressure for accountability.

“Truth is perhaps the most important element of the Transitional Justice process because finding the truth is important to all the other elements of the model. It is like in a personal dispute. The truth is necessary to be known for a solution to the problem to be found.

“At the level of individuals, there are thousands of families who have members of their families still missing and whom they feel they cannot abandon. They need an acknowledgment of what happened to them which has not yet happened, though the war is over more than eleven years. They need to be able to mourn and remember and not be refused access to cemeteries and to memorials.

“The most important pillar from the perspective of the future and of the long term is institutional reform that will address the roots of the conflict. The new constitution being drafted by the constitutional committee provides an important opportunity for institutional reform. The draft law that is intended to govern the Port City is presently before the Supreme Court. In its current formulation the law significantly reduces the powers of parliamentarians over the Port City.

“The governing body of Port City will comprise appointees of the president who need not be citizens of Sri Lanka. The Port City Economic Commission will not be subject to the supervisory powers of parliament. It therefore appears that the Port City is meant to be an entity with full financial and administrative autonomy from the rest of the country.

“This new thinking of the government can be utilised to upgrade the power sharing arrangements in the provincial council system too. If there is a negotiated solution to the ethnic conflict the economic benefits can be enormous due to internal cohesion and the goodwill of the international community…”